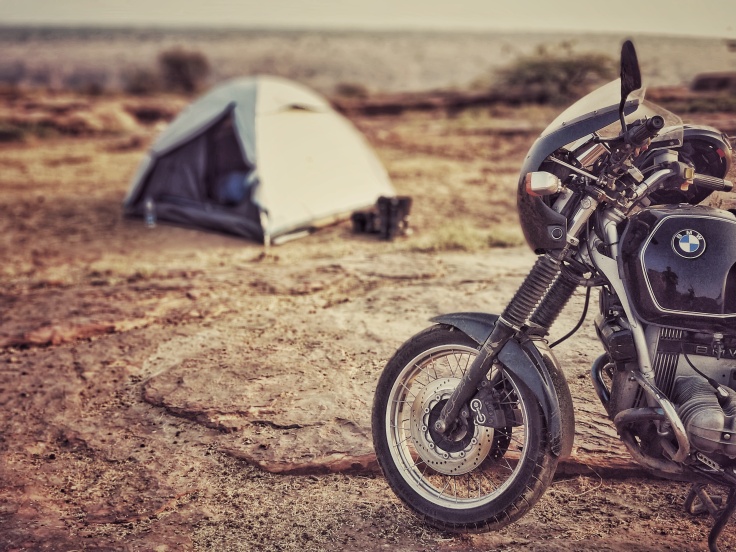 “Traveling by motorbike must be great. You’re free like a bird!” This simile was told me by a fellow traveler. Indeed, compared to backpacking whilst relying on buses or planned flights, having a motorcycle must seem most independent. So what does it actually mean to travel by motorbike, especially in comparison to other vehicle types? In the following, I will list some of the characteristics thereof.

Ease of traveling: Compared to traveling by car, a motorbike has less of a footprint, which is helpful on small or busy roads. You can park it anywhere and when parked, it might drag a little less attention. At border crossings or gas stations, sometimes you will be waved in front, since you won’t need that much time anyway.

Cost of traveling: A motorcycle uses a little less fuel than a car. In some countries, you don’t even have to pay at highway toll stations. Iran, for example, doesn’t have a highway rate for motorbikes since there are no local bikes above 250 cc and therefore motorbikes are not allowed on highways (foreign motorbikes seem to be accepted, though). In India, there even is a small lane on the very side of toll points for two-wheelers allowing them to just pass. In account of the number of places you visit on the way, it is cheaper than combining a number of flights, bus and taxi rides. Customs regulations will most likely require you to ship your vehicle back to your own country. With a motorbike, even flying it will seem affordable.

Reach: You can reach more remote places, being able to drive on more narrow roads and due to better offroad capabilities of two-wheelers compared to cars. You don’t need to worry about your lugguage since you bring everything you have with your bike.

Repairability: Compared to a car or a van, there are less parts and components are more accessible. If you’re not driving a technology-laden top-notch bike, you yourself of many workshops will be able to repair it if something brakes.

Space: You don’t have a lot of space, being kind of forced to focus on the important stuff to take and not being able to buy souvenirs at the places you reach.

Connection: In both a positive and a challenging way, you are more exposed to your surroundings. Weather and climate will hit you directly, so you have to plan more carefully when and where you go, eventually carrying warm riding gear and additional rain gear. When you stop somewhere, there is nothing between you and your environment. So many people come walking up to me, being curious about me and the foreign motorbike. Most of the times, they just want to have a chat or take some pictures with me, which would not happen to this extent when sitting in a car.

While driving, though, you will perceive your surroundings much more directly. Robert M. Pirsig describes it in Zen and the Art of Motorcycle Maintenance: An Inquiry Into Values like this:

“You see things vacationing on a motorcycle in a way that is completely different from any other. In a car you’re always in a compartment, and because you’re used to it, you don’t realize that through that car window everything you see is just more TV. You’re a passive observer and it is all moving by you boringly in a frame.

On a cycle the frame is gone. You’re completely in contact with it all. You’re in the scene, not just watching it any more, and the sense of presence is overwhelming. That concrete whizzing by five inches below your foot is the real thing, the same stuff you walk on, its right there, so blurred you can’t focus on it, yet you can put your foot down and touch it anytime, and the whole thing, the whole experience, is never removed from immediate consciousness.”

Most the above-mentioned points would also account to driving by bicycle. Being much more limited in the lugguage you can carry and the distance you can cover in a day, you are probably soaking up your nearest environment even more.

So why travel by motorbike? To me, having a motorbike is quite the perfect compromise between getting connected to your surroundings and being able to cover a reasonable range in a day.  And maybe most of all — it’s fun. It’s hard to put in words how much I enjoy driving the R100.

When free like a bird, you will have to ask yourself the other question: “Should I stay or should I go?” Harun Yahya puts it like that:

“I always wonder why birds choose to stay in the same place when they can fly anywhere on the earth, then I ask myself the same question.”